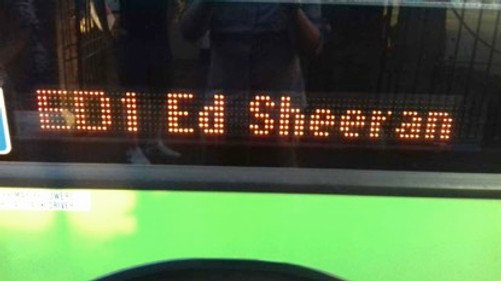 I went to go watch Ed Sheeran on the 26th August 2019 at Chantry Park in Ipswich. When I got off the train in Ipswich, there was a bunch of security to the left organising people in a line to get on a bus directly to go see him. The bus had his name on it, I realised this was a huge event, even though he had been performing for several days prior to this at the same venue. About an hour later, I got a bus from the bus station with my dad to the venue that was specifically dedicated for people going to see Ed.

When I arrived a rock band called The Darkness was performing as a warm-up act. They had a number two hit in the UK singles charts in 2003 with “I believe in a thing called love”, which was the song they performed last. The lead singer, Justin Hawkins, kept taking breaks between songs to talk about how he just wants to make everything ‘rock and roll’ and keep his integrity. It is quite fitting that the band comes from Suffolk since Ed does as well. I enjoyed their performance, their sound on stage was impressive; they had heavy distorted guitars, but their sound quality was crystal clear. My father thought the lead singer was a bit pretentious and I noticed he didn’t get as much applause until the last song probably due to the fact a lot of people came to watch Ed.

The rapper called Stormzy performed as special guest the night before and I heard a man say he was gutted he didn’t get to see that. I was surprised when Ed announced that this was the last show of a tour that has being going on for the last 2 years. It would seem Ed has been working non-stop for the last 8 years making albums, preforming shows and doing collaborations, music videos, appearing in movies ect. He announced that he would be taking a long break from music so he can spend time with his family.

Once Ed Sheeran took the stage, he performed “Castle on the Hill” and “The A team” using his signature loop pedal, and explaining what it is, and how it works. He mixed/transitioned the song “Don’t” with his new song “remember the name” which feature Eminem and 50 cent but their verses where cut out since they weren’t there to perform. It worked well because the songs have similar instrumentation, melody and tempo. In between every song he would talk and take a drink from his water bottle, he made it clear that this was his last show of his Divide tour, which he had been on, for the last two years. He said it was very fitting that his tour ended in Ipswich, since he grew up in a town 10 miles away called Framlingham. He finished on the song ‘sing’ once he had finished his planned set and was preparing to leave the stage, and say goodbye, the crowd cheered him on for an encore. He performed two more songs, “Shape of you” and “You need me, I don’t need you”.

The next day I walked through Christchurch park and there were several trees that had been planted with pictures of Ed Sheeran surrounding them. There was an exhibition in the park for Ed Sheeran, it was called “Ed Sheeran, Made in Suffolk”. I then realised that Ed Sheeran is a local legend and a great inspiration for the residence of Suffolk. He is clearly the most well known person to come from Suffolk by a long shot. He inspires others to dream that one day that they could be as successful as him.

I have learnt you don’t need a band to be a great performer since Ed Sheeran is able to do just about everything by himself using his loop pedal. I am certain he inspired a lot of local artists who perform/busk on their own. I noticed he is the go to artist for solo acts to do covers by, probably because his songs are quite stripped down and mainly driven by guitar.

The only thing that I didn’t like is that none of the songs made me want to dance but at the same time I appreciate Ed sticks to his roots. He has found a formula that works for him in a unique way that has inspired a lot of singer songwriters. The main thing I would take away from this, is that he has worked extremely hard and perfecting his craft and delivering time and time again whilst being meticulous about the type of music he makes and how his fan base will consume it.

For instance even though he is able to rap he hasn’t really exploited this genre of music because his fan base probably would not enjoy an album full rapping as that is departure from his signature style. He truly is a purist; which is exemplified by the fact that his solo albums don’t have any featured artists on them and he helps produce and play guitar on most of his songs. Ed Sheeran has made two collaboration albums, but he doesn’t consider them to be his own studio albums. In his mind he has only made three ‘+, x and ÷’.

The fact all of his albums follow the theme of being titled after a numeric symbol is another example of he has follows a formula.

1. Castle on the Hill

I thought it was amazing that he performed his final show in his hometown which I grew up in. It’s clear that he is a local legend and that people in Ipswich see him as a hero. There was an exhibition in Christchurch park and was posters all around the town.

I really wanted to go watch Aitch perform in Norwich which is a city close by he performed on December 12th but tickets sold out really quickly and I didn’t get to buy one. He added extra dates to his September tour because all the tickets sold out in 7 minutes....
Read More

During the lockdown, we took it upon ourselves to invest some need needed time into our lovely studio. Having been here almost 20 years and never really having the time to give it a proper facelift, it took 8 of us 9 weeks to completely transform the building and it...
Read More

The lock-down has been a strange time for us all. It's forced us to rethink the way we go about our daily lives, made us reevaluate our priorities and helped us appreciate what's most important in our lives. The staff at JDT are no exception, and we've been working...
Read More

Loads of Fun had at our Summer Arts Activities!

https://youtu.be/SA9ycndTT4k Our three Summmer Arts Workshops were so much fun this year, with the launch of our very first Animation Creation course, Songwriting Course and Band Jam! 25 incredibly creative youngsters attended our sessions, creating an animation about...
Read More

https://youtu.be/SeFQ-27SZm0 RockavoX continued to spread their festive vocal joy this week with three more performances across Norfolk! We were thrilled to be invited to perform at the Nicholas Hammond Christmas Extravaganza on Thursday 7th December 2017. We were...
Read More

We use cookies on our website to give you the most relevant experience by remembering your preferences and repeat visits. By clicking “Accept All”, you consent to the use of ALL the cookies. However, you may visit "Cookie Settings" to provide a controlled consent.
Cookie SettingsAccept All
Manage consent

This website uses cookies to improve your experience while you navigate through the website. Out of these, the cookies that are categorized as necessary are stored on your browser as they are essential for the working of basic functionalities of the website. We also use third-party cookies that help us analyze and understand how you use this website. These cookies will be stored in your browser only with your consent. You also have the option to opt-out of these cookies. But opting out of some of these cookies may affect your browsing experience.
Necessary Always Enabled
Necessary cookies are absolutely essential for the website to function properly. These cookies ensure basic functionalities and security features of the website, anonymously.
Functional
Functional cookies help to perform certain functionalities like sharing the content of the website on social media platforms, collect feedbacks, and other third-party features.
Performance
Performance cookies are used to understand and analyze the key performance indexes of the website which helps in delivering a better user experience for the visitors.
Analytics
Analytical cookies are used to understand how visitors interact with the website. These cookies help provide information on metrics the number of visitors, bounce rate, traffic source, etc.
Advertisement
Advertisement cookies are used to provide visitors with relevant ads and marketing campaigns. These cookies track visitors across websites and collect information to provide customized ads.
Others
Other uncategorized cookies are those that are being analyzed and have not been classified into a category as yet.
SAVE & ACCEPT